Has there been much change now that I have turned 25 (yes, I'm constantly reminded that I'm over a quarter of a century old) Well I still feel the same way, talk the same, and although I'm pretty sure I've gained a couple more pounds... I'm still generally relatively similar. Thought I'd share some pictures of my first week of being 25. I had a party at home on Saturday night with my relatives and friends, it turned out to be a pretty big thing! There were heaps of food too. One thing that struck me most was that it was rather strange having my birthday on a hot day... I'm used to having my birthday in autumn. Sunday was a birthday party for a girl from church, and a whole bunch of us went down to the riverside and chilled out for an entire day before the 6pm service. I got to go biscuiting (kindda like water skiing, but you sit in giant rubber rings) which was heaps of fun, and got to sunbathe and actually turned a few shades darker (something that hasn't happened to me in the longest time). And I also got to catch up with Maree and Daniel on Wednesday - we took a stroll along Shelley River, and if you look closely at the picture of Maree and I, you'll even be able to spot the sparse skyscrapers in Perth's CBD. A pretty awesome first week, 51 more of those to come! 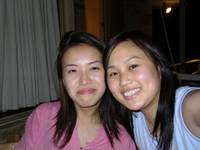 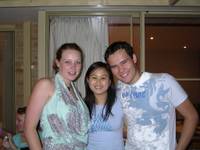 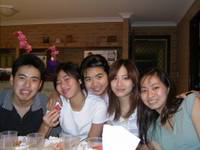 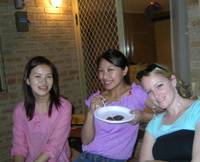 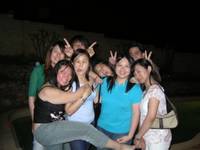 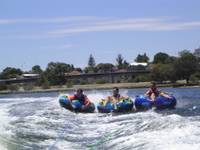 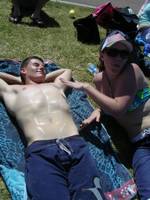 the painless way to get abs - draw them in with zinc + in the process of browning! 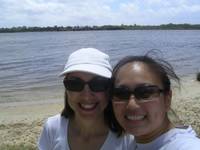 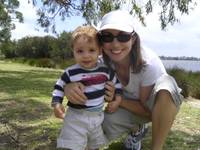 maree and i next to the shelley river + daniel and maree
Posted by annong at 1:14 am No comments:
Email ThisBlogThis!Share to TwitterShare to FacebookShare to Pinterest

Guess who I met last night? Lolly (who flew in yesterday morning) and I went to Riverview's New Comer's Night last night, we arrived a little earlier, so we grabbed a drink and plopped ourselves in the nearest seating arrangement. The event was about to begin and as I turned my head towards the entrance, who did I see... MAREE HERATH and baby Daniel from The Vine Christian Fellowship HK! We were both amazed that we found each other. I knew that Maree and her family were going to move back to Perth even before I left HK but never got her contacts. I had tried to get her details off others and her likewise about me but no one responded back to us. It was just a divine encounter! I mean what are the chances of me bumping into her. Here are the side details... I had been wanting to attend a New Comer's Night for a while now (the event only occurs once every 3-4 months) and I had already missed 2 of these events because I wasn't able to make it both times due to various reasons. Maree has only been to Riverview Church for 6 weeks and heard about the church from Kate Bowen-Jones. I attend the Sunday 6pm service, whereas Maree has been checking out the Sunday 11am one. Think about it, if I had attended a New Comer's Night previously, I wouldn't have gone last night. I wouldn't have bumped into her at church cuz we go to different services. And even if we were in the same service, there's a slim chance of us actually seeing each other cuz there are lots and lots of people at the services. There just isn't such a thing as a lucky coincidence! I feel incredibly blessed to have connected back with Maree and looking forward to catching up with her soon!

I'll back track... Last Sunday, my family and I went abalone catching with some of my parents' friends. Coming from HK where abalone is all the rage and ranked highly in the eyes of seafood lovers, we were pretty pumped to actually catch these things ourselves. We only got 2 licenses among us 4... each license is restricted to 20 abalones per day. The abalone season around Perth's metropolitan area is from November to mid-December and only on Sundays... so it's only 6 catches possible. Anyway Sarah and I managed to join dad and the uncles out on the rocks and used screwdrivers to pry the abalones off the rocks. I have a new found respect for abalone catchers... it's pretty rough and dangerous out there! I got swept off by a couple of waves and now sport some new bruises and scratches around my body, Sarah lost a flip-flop (not to self: wear enclosed shoes next time!), dad lost a screwdriver. The regulations say you can only catch abalones that are larger than 60mm, so it makes the catch so lucrative. I was able to catch a couple pretty big ones. There were lots of Asians at the beach (typical Asians all stocking up on abalone for the year). The conclusion of the catch - awesome! Hoping to be able to go again next week. 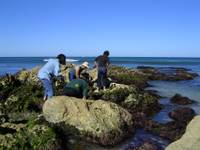 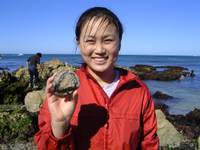 everyone working hard! & my catch of the day

On a side comment, I received these links a few days ago and I loved this and also this. Although I haven't watched Super Size Me (I've heard lots about it), I don't think it'll deter me from going to Maccas. I agree with Cliff, stop playing the blame game, we've been given choices, make them wisely!

Posted by annong at 6:47 am 3 comments:
Email ThisBlogThis!Share to TwitterShare to FacebookShare to Pinterest

I'm sitting here in front of the computer because I can't sleep... must be due to the many coca-colas I had at Yoshi and JP's apartment tonight (plus the tea before that!) I'm supposed to wake up around 5am to go and fish for abalone with the family... ooh I reckon it's going to be painful! Is it from ageing?

Hanging out at Brando's after Young Adults on Friday night, the conversation topic that came up time and time again was about being "ancient" and "old"... I think it was probably cuz we all celebrated a guy's 25th birthday and everyone else from the group are mainly between the age of 18-21. Gosh I thought (and declared out loud), I was being catergorised under the "ancient and old" heading... how horrific!

Like Ruth, I have been finding myself thinking about turning the age of twenty-five. I guess there are definitive years in our lives... Age 18 - you can get your permanent ID card in HK, you're officially considered an adult, you get to vote, you can start driving a car, and for me it was the year I went to uni. Age 21 - gee I don't know, but it's the year you throw the biggest party, I guess that makes you even more of an adult, and for me that was the year I graduated from uni and started my first permanent job. Age 25 - I get the impression that people are expecting great things to happen once you reach this age, like have a true calling (area you really like to work, commit yourself in), have a special relationship with someone, be extremely independent, earn packets of money, to be focused (or at least look semi like that).

The reality for me... a girl asked me on Friday night how I felt about not being in a relationship (after the age question). At first I was a little taken back cuz I had only met her about 20 mins before, but as I answered her I felt that I was being reaffirmed - that I was secure about myself and with my relationship with God that I wouldn't dare add a relationship in my life that would compromise that situation. I had done it before when I was extremely insecure and just needed lots of physical contact (in my first and second year of uni) in the end I was almost shattered emotionally and spiritually, and I probably hurt many people in the process. Sure I'd love to be in a relationship, perhaps find the man and get married, but it's alright for now. After finding out that I wasn't going to be doing speech pathology next year, I was initially pretty bummed. And as I talked to other people about my situation concerning my future, I was inspired (thanks Liz K + Asti), so I put my foot down and applied to do the graduate diploma course in primary education next year. I have to thank Joe and Katie who were my angels that checked my personal statement I had to hand in. I have yet to know the result... but I feel that I have put my fear of rejection back, and stepped out in faith, and I'm at peace about it. I can't control my life, there are too many factors that I can't grasp, all I can do is surrender. I believe that my God will be able to handle it just fine! As for turning twenty-five... I'm really looking forward to it! It's going to heaps of fun! (what's the point in using anti-ageing creams when you can't see the difference on young baby skin?! - it's a challenge!)